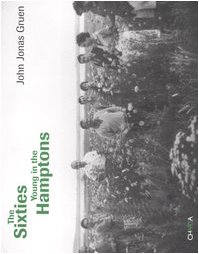 John Jonas Gruen: The Sixties Young in the Hamptons
by John Gruen
Publisher's Description
The Hamptons, the string of idyllic country beach towns on eastern Long Island within a morning’s drive of New York City, haven’t always been reserved for the rich and famous: some of the twentieth-century’s best-known cultural figures weren’t rich or famous yet when they arrived there. In 1960, the writer and photographer John Jonas Gruen and his wife, the painter Jane Wilson, bought a carriage house in Water Mill, a hamlet between Southampton and East Hampton. Gruen, then an art and music critic for the New York Herald Tribune, and later a regular contributor to The New York Times, ARTnews and Vogue, had long been an avid photographer, and it gave him enormous pleasure to take pictures of his family and friends at every possible opportunity. Thus it was that The Sixties: Young in the Hamptons was born, a visual memoir of the young Robert Rauschenberg, Jasper Johns, Willem de Kooning, Marisol, Jim Dine, Leonard Bernstein, Frank O’Hara, John Ashbery, James Schuyler, Kenneth Koch, Stella Adler and Edward Albee, among many other gifted visitors.
ISBN: 8881585960
Publisher: Charta
Paperback : 96 pages
Language: English
Dimensions: 0 x 0 x 0 inches