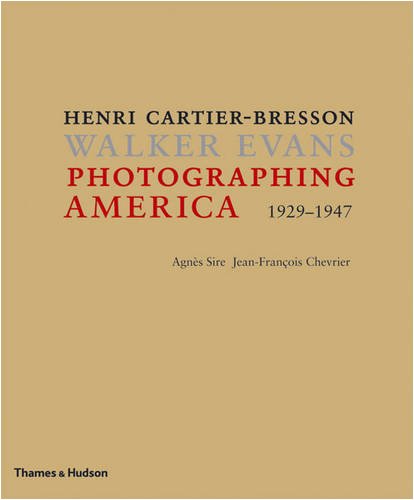 Photographing America: Henri Cartier-Bresson / Walker Evans
by Agnès Sire
Publisher's Description
Walker Evans and Henri Cartier-Bresson belonged to the same generation and shared an insatiable intellectual curiosity. Their works had been exhibited together in 1935 at the Julie Levy Gallery in New York, and they were both working in America in 1946-47, when Cartier-Bresson spent eighteen months preparing his show at The Museum of Modern Art.

This book draws a parallel between the photographs on America made by Evans and Cartier-Bresson in the period from 1929 to 1947. Evans had already published American Photographs and Let Us Now Praise Famous Men (with James Agee) and was at work on Many Are Called. Cartier-Bresson, on the other hand, was making a fresh start, leaving behind his work in film and embracing a career as a still photographer. Although they both approached their work as a form of social criticism, imbued with references to literature and painting, their practices were always quite distinct.

Photographing America presents an opportunity to confront and compare the visions of both of these seminal photographic masters at once.