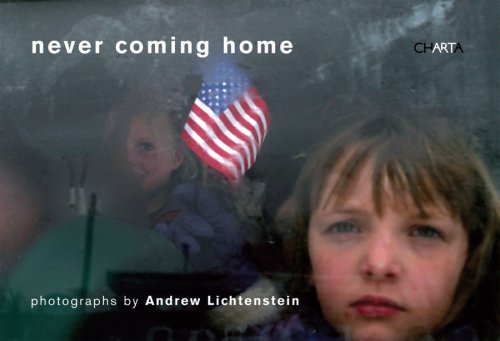 Andrew Lichtenstein: Never Coming Home
by Andrew Lichtenstein
Publisher's Description
America lies thousands of miles from the deserts of Iraq, and its civilians are rarely truly forced to confront the fact that it is a nation at war, and has been for more than four years. But every day, the list of casualties grows longer. The men and women killed in Iraq are buried every week back home. Their funerals are not dramatic national events, and they are rarely sites of political soul searching. Most families want to grieve privately, to remember their children as they knew them and as heroes who have died for all of us. Photographer Andrew Lichtenstein says of his prizewinning work, 'These funerals are about paying tribute to promising lives cut drastically short. There are some funerals that I never take the camera out of the bag. And then there are others that allow us, I can only hope, to begin to feel the true cost of war.' Lichtenstein's work has appeared in the New York Times, Time, Newsweek, Harper's, the Atlantic Monthly and Aperture, among other publications. In this powerful new portrait of grief and sacrifice, he documents the families of eight American soldiers killed in Iraq. With interviews of the families by StoryCorps oral history producer and Slate and MSNBC contributor Zachary Barr. Never Coming Home is a project by Andrew Lichtenstein and Robert Peacock.
ISBN: 8881586371
Publisher: Charta
Paperback : 80 pages
Language: English
Dimensions: 9.3 x 6.5 x 0.3 inches