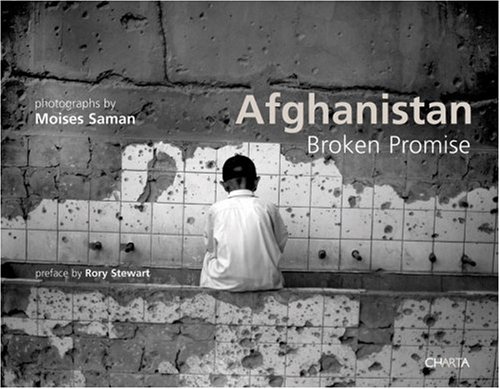 Moises Saman: Afghanistan Broken Promise
by Moises Saman
Publisher's Description
Moises Saman, born in Lima, Peru, in 1974, was a Los Angeles college student when he traveled Chiapas to photograph the aftermath of the 1995 Zapatista uprising. After graduation he traveled to Kosovo, and he's been working as a photojournalist ever since. Saman was one of only a few American photographers to remain in Baghdad during the 2003 Coalition bombing campaign, when he was arrested and accused of espionage by the Iraqi secret police. He spent eight days in prison before being deported to Jordan, after which he returned to continue his coverage. In this book, he returns to Afghanistan. The dramatic photographs collected in Afghanistan Broken Promise track five years of conflict in that country, and observe the apparent failure of the reconstruction effort: due to violence and government corruption, all of the large-scale reconstruction projects outside Kabul are at a standstill, while high-rise luxury hotels and late-model BMWs can be seen all over the capital. As before and during Taliban rule, warlords and militias control whole provinces without regard for human rights. And now the Taliban itself has been embarking on major offensives again. Broken Promise observes the lives of Afghan civilians beginning with the 2001 U.S. invasion and up through the resurgence of violence in 2006-07. Saman is a full-time photographer for Newsday.
ISBN: 8881586460
Publisher: Charta
Paperback : 112 pages
Language: English
Dimensions: 10.5 x 8.2 x 0.4 inches