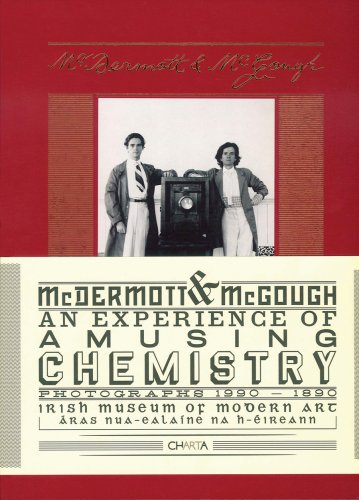 McDermott & McGough: An Experience of Amusing Chemistry
by Enrique Juncosa
Publisher's Description
'People thought we were just Victorian queens who wanted to make little kitten paintings on pillows and be kitschy,' quipped Peter McGough, one half of the collaborative duo McDermott & McGough, as he reminisced about the East Village art scene in the 1980s-where the artists met and honed their inimitable style-in a 2003 Artforum interview with Bob Nickas. The artists have since become known for their performative fusion of art and life-namely dressing like Victorian dandies 24 hours a day and embracing archaic photographic techniques such as palladium, gum, salt and cyanotype printing. They are not escapists, however, as Roberta Smith has pointed out. 'The allusions to turn-of-the-century dandyism are combined with often explicit references to homoeroticism and to the artists' own sexuality. The implication is that the moral hypocrisies of the Victorian era are still in effect today.' Featuring more than 120 images, this volume, released on the occasion of McDermott & McGough's retrospective exhibition at The Irish Museum of Modern Art, Dublin examines two decades worth of the team's photographic work and includes texts by Matthew Higgs, Director of White Columns in New York, and Seán Kissane, Curator of Exhibitions at The IMMA, Dublin.
ISBN: 888158672X
Publisher: Charta/Irish Museum of Modern Art
Leather Bound : 224 pages
Language: English
Dimensions: 9.7 x 13.1 x 1.1 inches