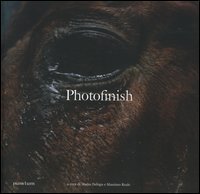 Photofinish vol. 2
by M. Reale M. Delogu
Publisher's Description
Man had already established a relationship with the horse 17,000 years ago, as shown by the cave paintings at Lascaux, while Homer described the neck-and-neck final of a horse race in 900 BC. In “Photofinish” Marco Delogu and Massimo Reale have concentrated their attention on the world of horse racing, its history and culture. The selection of photographs chosen by Marco Delogu is flanked by a poetic commentary compiled by Massimo Reale, with pieces dating from the fifth century BC to our own time.

Photographs by Koudelka, Doisneau, Muybridge and Richards are teamed with verses by Sophocles, Carducci, Yeats and Bukowski, to create a striking book that documents how the horse, which has almost disappeared from our daily lives, has always found space in our imagination.