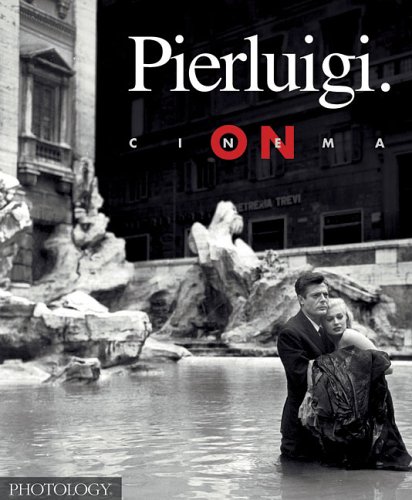 Pierluigi on Cinema
by Pierluigi Praturlon
Publisher's Description
Pierluigi Praturlon was born in Rome in 1924, and grew up to become a photographer in the city’s cinematic golden age, the prime of la dolce vita. As Fellini’s on set collaborator—shooting both stills and proto-paparazzi candids—legend has it that Pierluigi was the one to suggest that Anita Ekberg climb into the Fontana de Trevi. Before the 1950s and 60s were over, he had collaborated with nearly every important Italian director and with the scads of Americans then making movies in Italy. This survey of Pierluigi’s work is also, perforce, a survey of cinema and celebrity during the 50s and 60s: Ben Hur, La Dolce Vita, Matrimonio all’italiana, Pink Panther and many others. His studio portraits include actors such as Marcello Mastroianni, Claudia Cardinale, Anita Ekberg, Peter Sellers and Raquel Welch, and he spent many years as Sophia Loren’s official photographer. As the 60s drew to a close and American productions abandoned Italy, Pierluigi resumed his relationship with Federico Fellini, and was there for his last films, Amarcord, Casanova, Orchestra Rehearsal, City of Women, And the Ship Sails On, and Ginger and Fred. When he withdrew from the profession, he gave away his immense archives, and in 1999, the last year of the century he had documented so well, he died in Rome.
ISBN: 8888359176
Publisher: Photology
Hardcover : 288 pages
Language: English