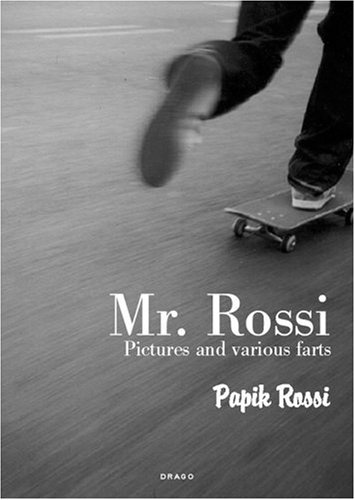 Mr. Rossi (36 Chambers)
by Papik Rossi
Publisher's Description
Roman street artist and photographer Papik Rossi started to skate in 1987 with the pioneers of the Italian scene. A decade later he was flying to the States every year to check out the scenes in New York and San Francisco. California found its way into not just his skating style but the 1996 creation of his clothing company, Trustever, and his growing portfolio of art and photography, which mingles all of those experiences together. Rossi co-produced the book Just push the button with the brands Slam Jam, Stussy and Carhartt. And he's been showing his work since 1999 in both underground galleries and museum shows like 30% Acrilico at the Museum of Rome in Trastavere in 2003. In 2004, he designed a sofa that turns into a skateable structure, presented at the Urban Edge Show in Milan. This is his first major monograph.
ISBN: 8888493115
Publisher: Drago
Paperback : 96 pages
Language: English
Dimensions: 6.7 x 9.4 x 0.3 inches