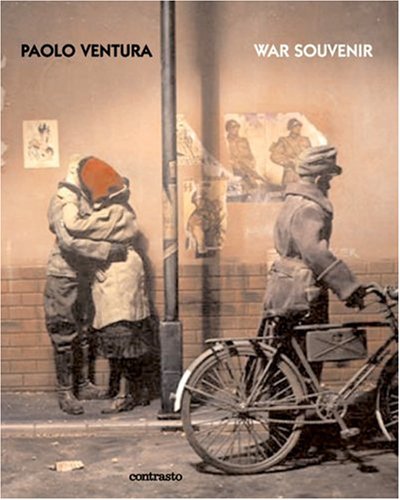 War Souvenir
by Paolo Ventura
Publisher's Description
It is World War II. The corpse of a soldier lies someplace in the mountains of central Italy; in Milan, a German hidden in the cellar of a house in Via Monte Nevoso is captured by partisans; in Turin, German soldiers look at the body of a member of the partisan organization, who has just been killed in a shoot-out.

These are only three of the photographs Paolo Ventura has included in War Souvenir, a book which reflects and recounts the crude intensity of that war. But unlike the work of other photographers, Ventura’s pictures are clearly fake: the images are the result of meticulous preparation, and each one presents a non-existent but apparently truthful memory. The soldiers are dummies, the scenes and objects in which they act are all in miniature. Ventura represents war as a game in a grotesque dollhouse, but he does so without abandoning either war’s emotion or its pain. His photographs constitute a profound and surprising reflection on the power of documentation and memory.

About War Souvenir, Francine Prose writes: 'Looking at these photos creates a moment of suspension, a melancholy hush in which we almost imagine we can hear whispers about the riddles of life and death, time and age, childhood innocence and adult knowledge, art, war, history, and such questions as: What are we seeing? What do we think we are seeing? And what we are concluding about what we think we are seeing?'
ISBN: 8889032979
Publisher: Contrasto
Hardcover : 96 pages
Language: English
Dimensions: 9.6 x 11.9 x 0.6 inches