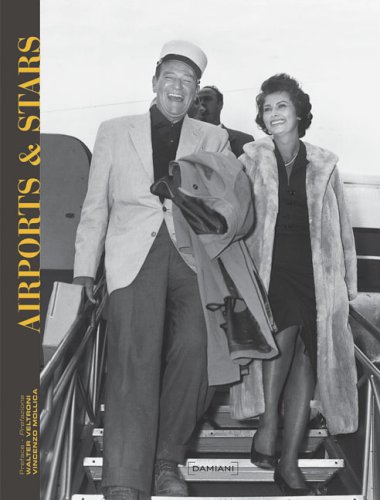 Airports & Stars (Spanish Edition)
by Walter Weltroni
Publisher's Description
From the publishers of Spaghetti & Stars and Cafè of Stars comes the retro (and prescient) & Stars, a collection of photographs of Hollywood actors, royalty and other celebrities from the golden age of Italian film—the 1950s and 1960s—arriving in Rome, back when comings and goings were event enough to merit a flash, and when the photographers who are now known as paparazzi could walk right up to the airplane steps. Here those independent lensmen—a profession and a genre born in the era documented here, one on the forefront of new realism and photojournalism— capture the salutes and waves, flamboyant and discreet, of Rome’s stars as they descended to earth, seizing the mythical something that they seemed to bring with them from the sky to terra firma. Each arrival was a striking performance on a then-novel stage, and the work of paparazzi has preserved this invaluable slice of la dolce vita. Perhaps by bequeathing these charming and glamorous moments to history and extending their subjects’ fame into the next century, the paparazzi make amends for all the compromising snapshots with which they troubled their famous subjects, and for spawning the multinational empire of celebrity spy photography that dominates today’s news media.
ISBN: 8889431164
Publisher: Damiani
Paperback : 160 pages
Language: English