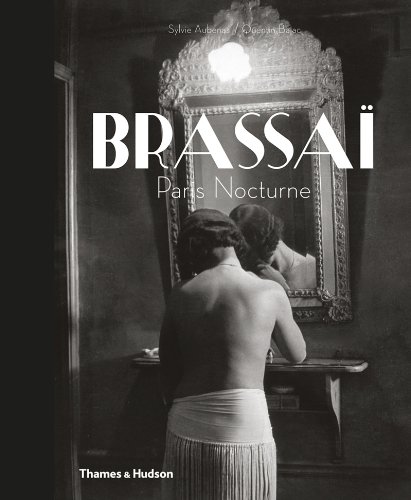 Brassaï: Paris Nocturne
by Sylvie Aubenas
Publisher's Description
Brassaï (1899-1984) was the first and is still the most famous photographer to chronicle Paris after dark. Born in Hungary, he came to the French capital in 1924, working first as a journalist and then embracing photography, but it was the Paris of the 1930s that forms the bedrock of his body of work.

Walking the city's streets at night, Brassaï captured a previously unseen world on camera. He shows us every face and every facet, from tough guys and showgirls to prostitutes and pleasure-seekers, from the bustling cafés and dance halls to the stillness of deserted streets and mist-shrouded monuments. Through his eyes, Paris becomes a world of shadows, in which light, the prerequisite for any photograph, is reduced to dimly lit windows, streetlamps in the fog, or reflections on a rain-soaked pavement.

This book brings together some of the best-known images from Brassaï's classic Paris After Dark and The Secret Paris of the 30s, showcasing them alongside previously unpublished photos and archive material. It places his work in its historical and artistic context, analyzing the unique nature of his photographic vision: part reportage, part social document, part poetic exploration. 296 illustrations, 214 in duotone
ISBN: 0500544255
Publisher: Thames & Hudson
Hardcover : 312 pages
Language: English
Dimensions: 0 x 0 x 0 inches