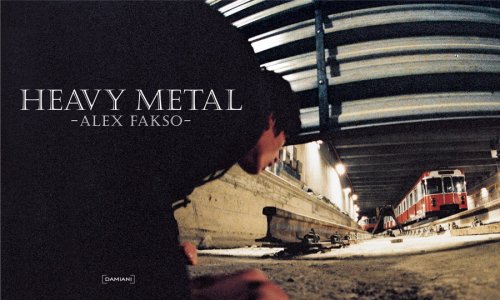 Alex Fakso: Heavy Metal
by Alex Fakso
Publisher's Description
In Heavy Metal, the Italian photographer Alex Fakso brings us behind the scenes of the secretive and low-down-glamorous world of European graffiti art, documenting the daily (and nightly) lives of that continent's most celebrated street artists-spraycans in hand. Fakso was allowed unprecedented access to this normally guarded underground culture, from Milan, to London, Berlin, Barcelona and beyond, allowing him to produce an electrifying body of work that conveys, on every page, the sense of an urgent covert mission. Fakso produced these photographs during the twilight hours, documenting each artist's unique tactics, movements and sense of personal determination: each photograph conveys the compelling sense of risk and adventure with which the artist approaches his work, whether entering into a shadowy train yard or negotiating a high fence to do so. In keeping with the tradition of the great urban documentarians Martha Cooper, Henry Chalfant and Bruce Davidson, who recorded New York's subway graffiti in the 1970s and 1980s, Fakso puts European graffiti, and its practitioners, on the map. This exhilarating, long-overdue collection represents the new generation of emerging European street artists, and is an essential record of European urban culture in our time.
ISBN: 8889431490
Publisher: Damiani
Hardcover : 164 pages
Language: English
Dimensions: 11.8 x 7.4 x 0.9 inches