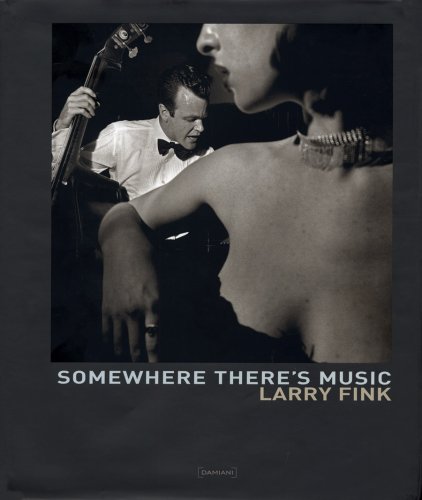 Larry Fink: Somewhere There's Music
by Larry Fink
Publisher's Description
Larry Fink secured enduring fame with the book Social Graces, which mixed images from working-class Pennsylvania with a portfolio from upper-crust Manhattan, observing manners and mores on the long, curvy couches of Studio 54 and in the chaos of Pat Sabatine’s eighth birthday party, where the screen door is always just about to slam. Fink has always been interested in what high and low culture have to say to one another, and has continued to seek the best of both behind the scenes at fashion shows in Runway and in the ring with sparring fighters in Boxing. Somewhere There’s Music collects Fink’s mostly-unpublished black-and-white jazz photographs from the 1950s to the late 1970s. In these photos Fink captures the cool heights of the Beat era, from Harlem’s famous Lennox Lounge, where the reader can almost hear John Coltrane serenading with his sax, to the Village Vanguard, where Sonny Rollins and Miles Davis made history. Other legends captured by Fink’s lens include Marion Brown, Roland Kirk, Steve Lacey, Leroy Jenkins (Revolutionary Ensemble), Archie Shepp and Lightning Hopkins, among many others. Sit back and be transported to another time with the hip cats of the jazz era in this passionate book featuring more than 80 duotone prints.
ISBN: 8889431563
Publisher: Damiani
Hardcover : 160 pages
Language: English