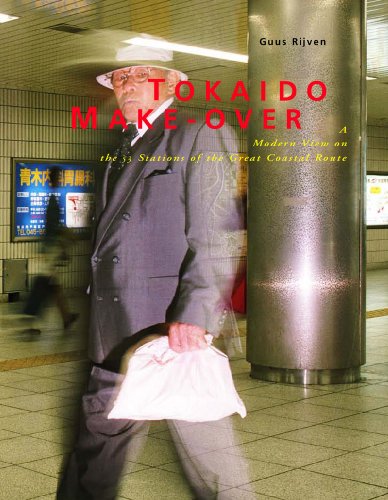 Tokaido Make-over a Modern View on the 53 Stations of the Great Costal Route
by Guus Rijven
Publisher's Description
The Tokaido or Great Coastal Route is the most important road in Japan, connecting east with west, Emperor with general, and spiritual leader with worldly ruler. Men of power were well aware of the Coastal Route's political and economic importance: he who controlled the road, controlled the country.

Two centuries ago, the route became the most important destination for anyone who could spare the time and money. There were already more than a million citizens living in Tokyo and the Tokaido was probably the most heavily travelled route in the entire world. Tea-houses, restaurants, inns and brothels flourished in the 53 official stopping places. Knick-knacks and souvenirs sold very well. Multi coloured woodcut prints were bought as mementos. Tens of Tokaido print series were published to meet the demand.

After the opening of Japan in 1868, the country changed rapidly. The art of the woodcut print evolved from low to high art. The Tokaido gradually lost its function and importance with the rise and development of both rail and road traffic. In the 20th century, modernisation and molestation were common matters of course because preservation of the landscape and architecture has never been a priority in Japan. Yet the Tokaido is still an important part of the Japanese collective, historic consciousness.

Tokaido Make-over weighs the imigery of the traditional, classic print series against the reality of 21st century Japan. This series of photographs is an ode to the Tokaido; the archaeology of the route, not a report of a journey.
ISBN: 9053305009
Publisher: Ram Distribution
Hardcover : 192 pages
Language: English