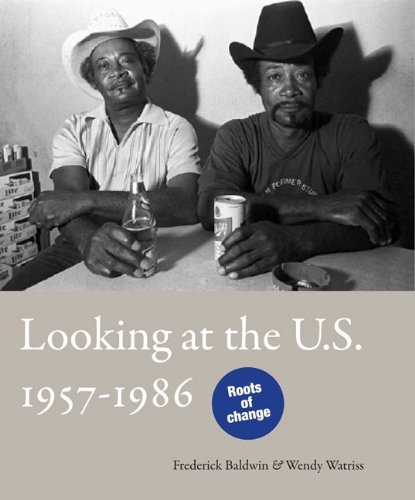 Looking at the U.S.: 1957-1986 (English and French Edition)
by Frederick C. Baldwin
Publisher's Description
Looking at the U.S. 1957-1986 is an unusual look at cultural and political life in the United States over nearly three decades of change and stability. It combines the individual projects of photographers Frederick Baldwin and Wendy Watriss as well as their combined 13-year documentary collaboration on three different cultural frontiers in Texas. What connects all of these projects is the artists' commitment to exploring social history beyond the clichés of class and race. In Wendy Watriss' Vietnam work, the images emerge from a sense of outrage at the injustices perpetrated on U.S. veterans of the Vietnam War by their own government. In Frederick Baldwin's Civil Rights work in Georgia and the lives of poor whites, the images provide an intimate glimpse of people's survival in their struggle for dignity and justice. These works honor the strength and beauty of these struggles. The photographs shown in Look at the U.S. reveal the human face of a complex and fascinating history that has particular relevance to the values and political philosophy of the momentous political changes in the U.S.

About The Limited Edition