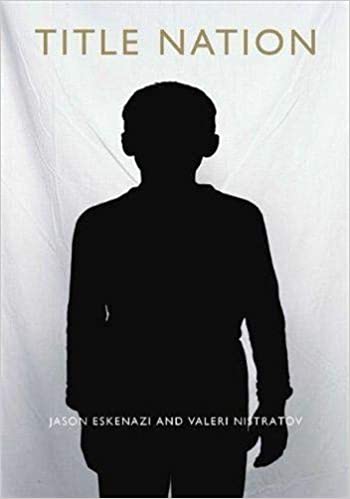 Title Nation (Russian and English Edition)
by Jason Eskenazi
Publisher's Description
Documentary photographers Jason Eskenazi (American) and Valeri Nistratov (Russian) ‘took to the road’ in Russia to shoot 4 x 5 colour portraits in various cities and across different levels of Russian society. It was their first time shooting large format so they created a method to shoot each portrait under the same conditions:(lighting, distance, pose). Only the locations changed: factory, street, train station, hospital, prison, post-office, sanatorium, etc. They travelled to more than 10 cities & towns, including: Novosibirsk, Kaliningrad, St. Petersburg, Sochi, Ivanovo, Kostroma, Krasnoyarsk and Moscow. A white sheet was used in the background for continuity purposes. During the session they documented the subject’s name, profession, date of birth, and where the photo was taken.

Usually only one portrait was taken for each subject and the process took less than one minute. The two short films included by Abigail Spindle show the photographers at the beginning of the project and near its end. Audio interviews were also recorded where and when possible to let the subjects speak for themselves. No attempt was made to represent all ethnic nationalities, in this series – especially from the former Soviet Union, living on Russian territory – but instead they concentrated on more or less pure Russians who make up the majority of the population and are thus referred to scientifically as the Title Nation.
ISBN: 9053307397
Publisher: Schilt Publishing
Hardcover : 216 pages
Language: English
Dimensions: 5.1 x 6.7 x 0.8 inches