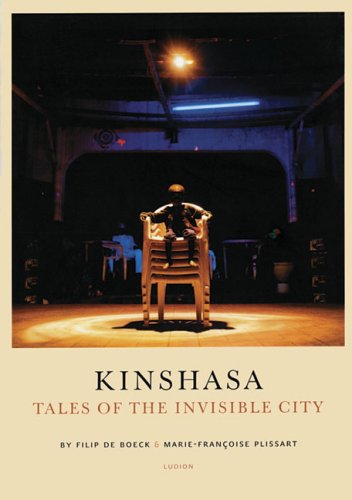 Kinshasa: Tales of the Invisible City
by Marie-Frangoise Plissart
Publisher's Description
'Both the camera and the pen, in a way, ultimately are colonial tools,' writes Belgian anthropologist Filip De Boeck in the preface to this collaborative book with photographer Marie-Françoise Plissart. They sought to overcome the inherent bias of their instruments and produce a work that provided a history not only of the physical and visible urban reality of Kinshasa, but also of a second, invisible city, one composed of the immaterial architecture and infrastructure, the place’s imaginative life.

Both scholarly and accessible, the resulting work, born out of De Boeck’s long engagement with the 'urbanscapes' of Central Africa and Plissart’s empathic eye, was shaped in dialogue with Kinshasa’s own inhabitants and the ways they write, read, talk, dance, and live in their city. The exhibition, out of which the book came won the Golden Lion prize at the Venice Biennale of Architecture in 2004.
ISBN: 9055445541
Publisher: Ludion
Paperback Language: English