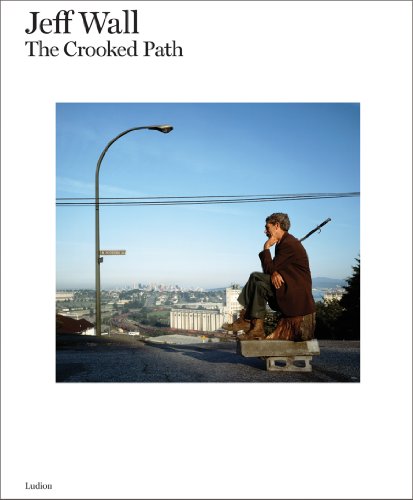 Jeff Wall: The Crooked Path
by Hans De Wolf
Publisher's Description
The photography of Jeff Wall (born 1946) is consciously and profoundly saturated in the social: in the Vancouver art community from which he first emerged, fully formed, in the late 1970s; in the racial and gender politics of our times, which he analyses with marvelous clarity in his huge photographic light boxes that declare an equal status with painting through their scale and their carefully plotted depth and grandeur; in the art history pantheon that informs his staged compositions, from Hokusai to Velásquez and Manet; and in his influence on at least two generations of photographers, most notably the Düsseldorf school (Andreas Gursky once cited Wall as “a great model for me” ). Jeff Wall: The Crooked Path examines the cultural context for Wall's tremendous achievement in photography. Wall himself has chosen 25 of his own photographs, taken between the late 1970s and the present, and has constellated them among the visionary company his work keeps, alongside reproductions of works by Marcel Duchamp, Diane Arbus, Eugene Atget, Wols, Andreas Gursky, David Claerbout, Thomas Struth, Frank Stella, Robert Smithson, Rodney Graham, Ian Wallace, Lawrence Wiener and R.W. Fassbinder. The Crooked Path orients Wall's photography across ten themed chapters, each of which is prefaced with an interview with Wall by Hans De Wolf. Also included are testimonies and essays by fellow artists and art historians, such as Luc Tuymans, Lawrence Weiner, Michael Fried and David Campany.
ISBN: 9055448621
Publisher: Ludion
Hardcover : 255 pages
Language: English
Dimensions: 9.8 x 11.6 x 1 inches