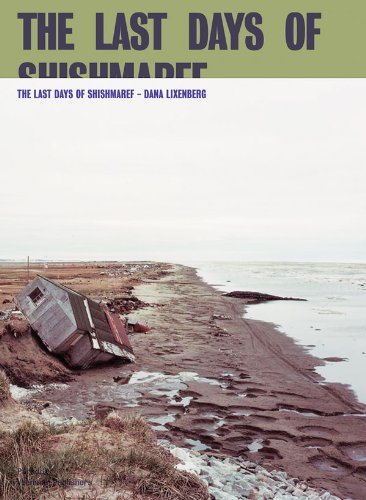 Dana Lixenberg: The Last Days of Shishmaref
by Dana Lixenberg
Publisher's Description
Shishmaref is disappearing. The village on an island off the coast of Alaska is slowly but surely being swallowed up by the sea. Global warming is causing the island’s protective permafrost layer to melt; the Chukchi Sea is freezing later in the season, leaving ravaging waves free to batter the island. It is estimated that the community of 600 Inupiaq Eskimos will has to leave their native land before 2020.

Photographer Dana Lixenberg stayed in Shishmaref for several weeks during the winter and summer of 2007. She explored the intricate relationship between the inhabitants and the rough, bleak and beautiful landscape that surrounds them. Using her 4x5-inch field camera makes the act of photographing more formal than hand-held photography, resulting in an intimate collaboration between the photographer and her subjects and in carefully composed still-lives. By combining portraiture, details of interiors, village tableaux, sea- and landscapes, Lixenberg creates a nuanced and complex portrait of this close-knit community, a community balancing between a past rooted in tradition and an uncertain future.
ISBN: 9059731107
Publisher: Episode Publishers
Paperback : 208 pages
Language: English