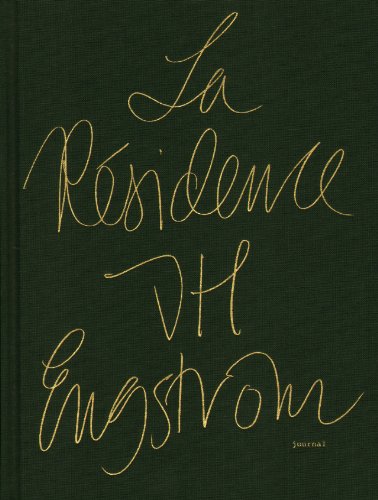 La Residence: J.H. Engstrom
by Engstroem
Publisher's Description
The pictures in this book came about during two separate stays in Brussels, arranged by the Contretype photo center, one in the summer of 2003, the other in the spring of 2006.

The conception of an artist sojourn at the Espace Photographique Contretype could be defined as follows:

The objective of this grant is twofold. In part, the idea is to offer the artist some time for reflection upon his work in general and its possible further developments. During his stay, he can analyze the evolution attained so far in his artistic inquiries, and experiment in new directions. Infrastructural details such as residence, laboratory facilities and other production tools needed for his project are made available. The results of his work are in no way subject to any particular demands, provided that they adhere to the normal limitations and regulations of society. On the contrary, projects performed within the frame of the grant are supposed to constitute an integral part of the artist’s production and aims.

The other part of the project is a specific view of the production site, the city of Brussels.

Thus, out of the combination of these two points of departure – the artist’s reflections upon his work so far, and the integration of a Brussels experience in the work he performs during his sojourn – the photographer in residence is offered an opportunity to create a testimony on his visit. In the shape of an exposition or a work in print, this may constitute a component in the photographer’s personal archive, as well as an otherwise valid interpretation of his development and artistic reasoning at the time.

I found it necessary to explain the matters above as an introduction, and to proceed no further, as words are not of much use to throw light upon the images of JH Engström. Particularly as words might be better suited for posing questions than for answering them.

The first showing of these pictures was an exposition titled “Je suis où”*. The phrase being constructed in interrogative shape without a question mark had the effect of transforming this existential question into a truth containing no answer.

In photography, JH Engström isn’t trying to explain, but rather to render a profound experience of the absurdity of the human condition. These images moves us into a disquieting part of ourselves: our solitude on earth.