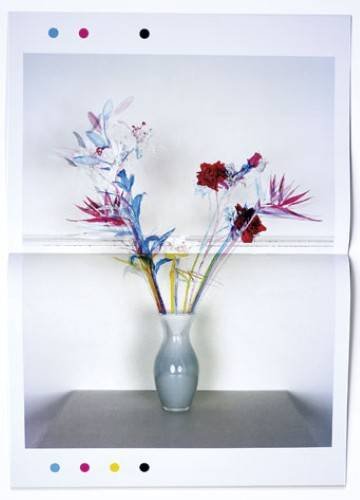 Jaap Scheeren and Hans Gremmen - Fake Flowers in Full Colour
by Jaap Scheeren and Hans Gremmen
Publisher's Description
Is it possible to create a three dimensional colour seperation? That was the question that triggerd Jaap Scheeren and Hans Gremmen to start this experiment. A bouquet of fake flowers was arranged as starting and striving point. The next step was to create four still lifes of this bouquet: one in Cyan, one in Magenta, one in Yellow and one in Black. These still lifes were photographed and merged into one image. In theory this should have been the same as the startingpint, but in practice it became 'Fake Flowers In Full Colour'. Ilse van Rijn wrote the text 'Phoenix' for this publication.
ISBN: 9490119067
Publisher: Fw
Paperback : 40 pages