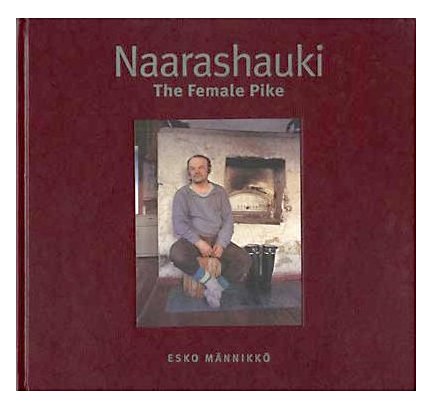 Esko Mannikko: Naarashauki The Female Pike
by Esko Mannikko
Publisher's Description
This is a SECOND printing

Revolving around the experience of fishing for pike in midwinter, Female Pike is a native son's study of rural Finnish people and their culture. Documentary/editorial in nature, the work has a sympathetic quality that comes only from an intimacy with the language and life these people live. Mannikko's color photography is shimmering at times and gorgeously muted at others, carrying the quiet paradox of despair and acceptance that pervades all rural towns, whether in North America or, in this case, Finland. One image in particular deserves to be described: the bare cream-colored interior of a room-perhaps a kitchen-is bathed in soft, northern light. A large silver milk jug and red bucket on the right is visually balanced by a blue milk crate and cardboard box to the left. In the center of the image, a man dressed in gray, blue, and rubber boots takes a drag on a cigarette while the pinkish lamb at his feet suckles the milk bottle in his hand. The printing in this book is extremely luscious, of the same quality as IChickenMoon (Cat# ZB744S, $49.95) by Eskildsen (also printed in Nordic lands). In English and Finnish.
ISBN: 9529127456
Publisher: Kaleva Kustannus Oy/Esko Mannikko, Oulu, Finland
Hardcover