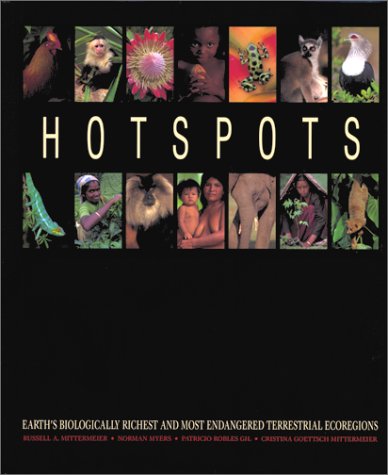 Hotspots: Earth's Biologically Richest and Most Endangered Terrestrial Ecoregions
by Russell A. Mittermeier
Publisher's Description
Twenty-five "Hotspots"--a term for areas that are the earth's biologically richest and most endangered terrestrial ecoregions--are carefully examined and presented through text and images in this hefty tome. While scholarly in its research, the images inthis volume make this a thoroughly captivating journey through these earthly paradises.
Amazon.com Review
A fraction of the earth's surface--1.4 percent--is home to 60 percent of the world's living species. Conservation International has identified these "hotspots" as needing immediate protection in the effort to safeguard the planet's biodiversity. More than just reservoirs of abundant plant and animal life, however, the hotspots are at-risk areas already significantly degraded by humankind. By the end of the first decade of the 21st century, these exceedingly important natural areas could be but a memory. But, according to author-biologist Russell Mittermeier, a relatively small amount of capital could help protect a combined area the size of Alaska and have a dramatic effect in conserving biodiversity. Some of these hotspots include the tropical Andes, Central American forests, Southeast Asia and the Philippines, the Cape region of South Africa, and the Mediterranean basin.

As a book, Hotspots is a weighty glimpse at a world in jeopardy. The color photography by the likes of Art Wolfe and others is first-rate--and literally eye opening: a surreal aerial photo of the Betsiboka River in Madagascar, for instance, shows massive erosion that is visible even from outer space. Each of 25 hotspot regions around the world is accompanied by text, scientific charts, maps, and lots of photos depicting both the destruction and the wonders of the natural world.