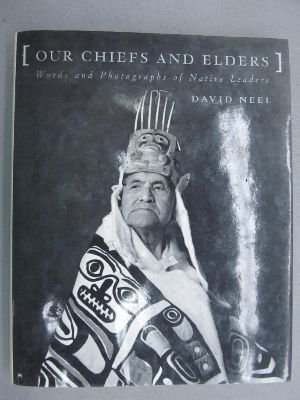 Our Chiefs and Elders: Words and Photographs of Native Leaders
by David Neel
Publisher's Description
This series of portraits of British Columbia Native chiefs and elders counters earlier depictions of "noble savages" or representatives of a "vanishing race". David Neel's photographs and conversations with his own people introduce us to a group of individuals who know who they are and whose comments on the present, coupled with their perspectives from the past, reveal a people who have a rich and unique heritage while fully realizing that they are living in the latter part of the twentieth century. Neel has chosen to show his subjects in paired images both in traditional dress, holding the symbols to which they are entitled by hereditary right, as well as in everyday clothing and surroundings. This demonstrates more effectively than any museum display the transforming power of the masks and ceremonial blankets. More importantly, however, it shows the people as they are - with their lives in two worlds, two cultures - and demonstrates that being Native is not a matter of appearance but rather a way of being. Many of these individuals were born in bighouses. They reminisce about travelling in log canoes and living off the land. In their conversations with Neel, they talk about their experiences in residential schools, about the potlatch law, and they explain the roles of hereditary chiefs, chief councillors, and elders. But they also have much to say that is relevant to contemporary social, political, and ecological issues. David Neel's respect for the elders is evident, as is the warmth with which he is regarded by his subjects. And that is what makes the book unique; as a collaborative project it is a powerful statement of a surviving race which is currently witnessing the rebirth of its culture as it takes its rightful place in contemporary society. "David Neel is a British Columbia artist and photographer whose work has appeared in museums and galleries in the United States and Canada. Descended on his father's side from a line of distinguished Kwagiutl carvers, he trained as a photojournalist in the United States and worked there for several years before returning to British Columbia to learn about the art of his ancestors for his own interpretations of carving and design. As a professional photographer, often working in black and white, he is particularly interested in collaborative documentary projects which involve the input of his subjects.".
ISBN: 0295972173
Publisher: Univ of Washington Pr
Hardcover : 191 pages
Language: English