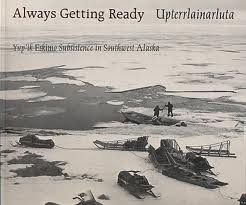 Always getting ready: Upterrlainarluta : Yup'ik Eskimo subsistence in southwest Alaska
by James H Barker
Publisher's Description
In this remarkable book, James Barker follows the Yup'ik Eskimo of Alaska's Yukon-Kuskokwim Delta through their year's cycle, beginning with spring seal hunting and ending with the winter dancing that celebrates life on the land. Striking black-and-white photographs and accompanying text capture a people alert to every opportunity. Whether they are waiting for the weather to clear for hunting or preparing testimony on the effects of oil exploration, they are, in the words of Yup'ik Agnes Kelly Bostrom, "always getting ready."

For the Yup'ik, the realities of life on the delta have underlined the practicality of their traditional culture. Living in a difficult climate, far from job centers and sources of supplies, the Yup'ik still rely on the land for food and materials. Their fishing, sealing, trapping, and berry picking are not sentimental reminders of a bygone way of life. They are practical necessities, bringing in as much as a thousand pounds of food per capita in some villages. A flexible and innovative people, the Yup'ik have been quick to integrate snow machines, CB radios, and other items they find useful into their lifestyle. They have revived the traditions of potlatches and dances--banned for years by missionaries--composing new songs that comment on snow machine joyrides, bingo games, and basketball.

James Barker has photographed the people of the delta for eighteen years. Like his Yup'ik friends and subjects, he has been ready at a moment's notice to participate in whale hunts, trapping trips, steam baths, and the annual exodus to fishcamp, one of the highlights of the year. The photographs and conversations he presents in this book are neither elegies nor souvenirs, but something more basic and more valuable. "When there is a moment of real connection or understanding," he writes of his Yup'ik companions, "then perhaps because we are different, I have a sense of catching something universal."

James H. Barker's photographs have been widely exhibited in Alaska and on the West Coast. His wife, Robin Barker, is an education instructor at the University of Alaska, Fairbanks. Mary C. Pete, a native Yup'ik, is a subsistence resource specialist for the Alaska Department of Fish and Game.

"Barker celebrates the resilience and vibrancy of a Native American tradition, the joy of people who cling to the gifts of close family and community ties, the ingenuity of a culture adapted to its environment and adjusting to a flood of new elements from the outside world." -- Richard Nelson, author of The Island Within