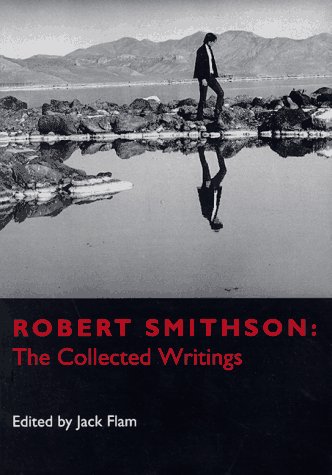 Robert Smithson: The Collected Writings
by Jack Flam
Publisher's Description
The revised and expanded edition of Smithson's collected writings includes a new introduction by Jack Flamm and several newly published, hard-to-find essays. As an unconventional artist, both photographer and environmental sculptor, Smithson captured the imagination of a generation of artists, critics, and writers.
Amazon.com Review
Robert Smithson's Spiral Jetty is the poster child for the antiformalist Earth Art movement of the 1960s and 1970s. A coil of earth, salt, and stone that Smithson built into Great Salt Lake, Utah, the piece is a tribute to the movement's scale and engineering as well as to its visionary union of art and nature. Smithson's questioning of the conventional attitudes of art and culture did not stop with the creation of objects and images; he was committed to exploring of attitudes and ideas as a critical component of his work. A revised and expanded version of The Writings of Robert Smithson, this book is a charged combination of articles and images in which the author demystifies the distinction between theory and practice.
ISBN: 0520203852
Publisher: University of California Press
Paperback : 385 pages
Language: English
Dimensions: 7.2 x 10 x 0.9 inches