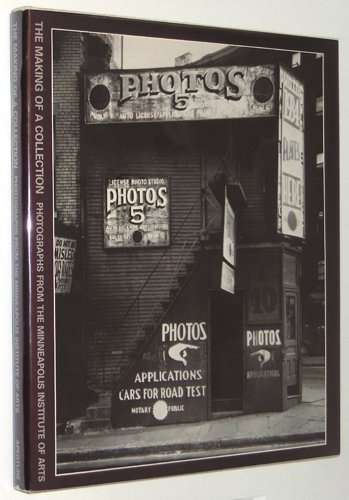 The Making of a Collection: Photographs from the Minneapolis Institute of Arts
by Carroll T. Hartwell
Publisher's Description
In the mid-1960s, The Minneapolis Institute of Arts was in the vanguard of museums that recognized the importance of photography as a fine art-an art that demanded to be collected and exhibited for a wider audience. While major institutions, such as The Museum of Modern Art and the Art Institute of Chicago, had created formidable photography collections and exhibition programs, few other, smaller institutions had followed their lead.

The Minneapolis Institute of Arts was an exception. Its decisive turn, in 1964, toward establishing a permanent place for photography was a major shift that reflected the changing position that photography held in the inner sanctum of museum art. For a relatively young medium with no real history, beginning a collection was, in part, contributing to its evolving history.

Entrusted to the supervision of a young, then untried curator, Carroll T. Hartwell, the museum began to acquire photographs that, in the aggregate, would reflect both photography's greatest traditions, as embodied in the pioneering works of Frederick H. Evans, Hill and Adamson, and Julia Margaret Cameron; its modern giants of this century, including Walker Evans, Robert Frank, and Lee Friedlander; and its boldest forays, as revealed in the works of the contemporary photographers Reed Estabrook, Frank Gohlke, Marsha Burns, Nicholas Nixon, William Eggleston, and many others.

Minneapolis's attention to current photographers is dramatically reflected in this volume. While the significance of the medium's traditions has always been a recurrent thread through the collection, its broader character reflects a modern sensibility that refers to the distinct aesthetic character and value of picture making, the camera, and camera vision.

The Making of a Collection documents the creation of a truly remarkable collection of photographs and the simultaneous development of the curatorial mind and eye.
ISBN: 0893811572
Publisher: Aperture
Hardcover : 151 pages
Language: English