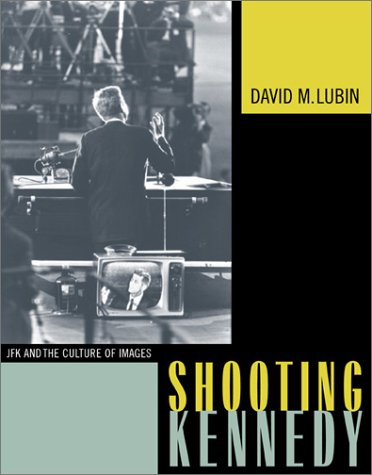 Shooting Kennedy: JFK and the Culture of Images
by David M. Lubin
Publisher's Description
Jack and Jackie sailing at Hyannis Port. President Kennedy smiling and confident with the radiant first lady by his side in Dallas shortly before the assassination. The Zapruder film. Jackie Kennedy mourning at the funeral while her small son salutes the coffin. These images have become larger than life; more than simply photographs of a president, or of celebrities, or of a tragic event, they have an extraordinary power to captivate-today as in their own time. In Shooting Kennedy, David Lubin speculates on the allure of these and other iconic images of the Kennedys, using them to illuminate the entire American cultural landscape. He draws from a spectacularly varied intellectual and visual terrain-neoclassical painting, Victorian poetry, modern art, Hollywood films, TV sitcoms-to show how the public came to identify personally with the Kennedys and how, in so doing, they came to understand their place in the world. This heady mix of art history, cultural history, and popular culture offers an evocative, consistently entertaining look at twentieth-century America. Marilyn Monroe, Sylvia Plath, Donna Reed, Playboy magazine, Jack Ruby, the Rosenbergs, and many more personalities, little-known events, and behind-the-scenes stories of the era enliven Lubin's account as he unlocks the meaning of these photographs of the Kennedys. Elegantly conceived, witty, and intellectually daring, Shooting Kennedy becomes a stylish meditation on the changing meanings of visual phenomena and the ways they affect our thinking about the past, the present, and the process of history.
ISBN: 0520229851
Publisher: University of California Press
Hardcover : 355 pages
Language: English
Dimensions: 7.3 x 9.2 x 1.2 inches