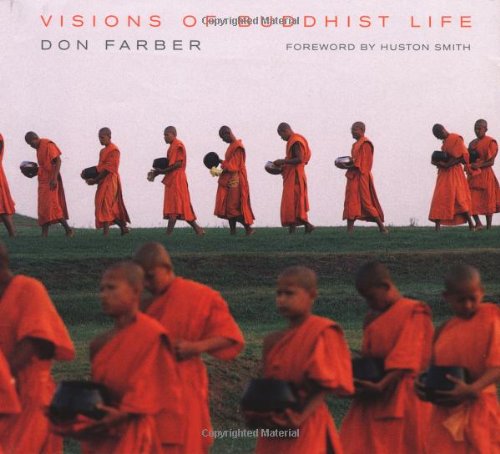 'What a kind, gentle, knowing photo book Don Farber has done here. It has taken a lifetime of commitment and insight for these photos to reach us.'
-Richard Gere

'Visions of Buddhist Life is a powerful and moving work, a spiritual odyssey, which beautifully captures the living spirit of Buddhism in today's world. Through this extraordinary collection of photographs, Don Farber chronicles his personal spiritual journey with a keen eye and an open heart, revealing a rare and intimate glimpse into Buddhist life. I highly recommend this remarkable book.'
-Howard C. Cutler, M.D., coauthor with the Dalai Lama of The Art of Happiness: A Handbook for Living

Don Farber's highly acclaimed photographs open a spectacular view of the beauty and diversity of Buddhist life around the world. His superb eye for composition, his attention to color and detail, and his intimate knowledge of Buddhism come together to produce outstanding, often breathtaking images. A selection of Farber's best work to date, Visions of Buddhist Life brings an important message of compassion, healing, and understanding to today's troubled world.

The photographs, together with Farber's extensive captions, take us to the temples, monasteries, and colorful streets of Los Angeles, Kyoto, and Bangkok, and travel onward to China, India, Nepal, South Korea, and Taiwan. They depict Buddhists alone and in crowds, in cities rich and poor, in meditation and in conversation. They also picture some of the great teachers of our day-the Dalai Lama, Thich Nhat Hanh, and Kalu Rinpoche. These images capture some of the last Tibetan masters to have received their training before the Chinese invasion and are a vital documentation of a tradition in danger of vanishing forever.

A study in the human face, in the art of spiritual devotion, in the evocative power of landscape, this collection of images provides an essential context for understanding Buddhism. Visions of Buddhist Life is also a visual and spiritual journey into a realm where the doctrine of nonviolence is paramount and where peace begins with the thoughts and actions of the individual.

Inspired by Buddhism early in his career as a professional freelance photographer, Don Farber became a disciple of the late Vietnamese Zen master and scholarThich Thien-An. Following the publication of his critically acclaimed book, Taking Refuge in L.A.: Life in a Vietnamese Buddhist Temple (1987, with text by Rick Fields and introduction by Thich Nhat Hanh), Farber set out to photograph Buddhist life internationally and, to date, has carried out this work in eight Asian countries and the United States. This Fulbright scholar's photographs have been exhibited at the San Francisco Museum of Modern Art and the Asia Society in New York, have appeared in magazines such as Life and Time, and have been featured on the covers of many books, including The Art of Happiness: A Handbook for Living by His Holiness the Dalai Lama and Howard C. Cutler (1998).