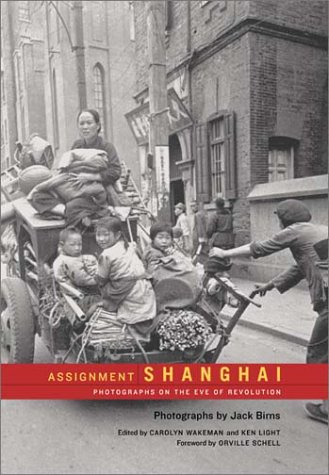 Assignment: Shanghai: Photographs on the Eve of Revolution (Series in Contemporary Photography)
by Carolyn Wakeman
Publisher's Description
Shipping out to China in December 1947 with three ten-year-old German cameras and a plum assignment from Life magazine, Jack Birns was fulfilling a boyhood dream. The reality was something else: refugees and prostitutes, soldiers and beggars, street executions and urban protests photographed in difficult and often dangerous circumstances amidst the poverty, corruption, and chaos of an expanding civil war. By then the ruling Nationalist Party had been battling the Communist threat for more than two decades, and Birns focused his camera on the human drama unfolding as war pressed ever closer to the country's financial, cultural, and commercial capital. His effort to show China's misery up close ran afoul of Time-Life publisher Henry R. Luce's fervent anti-communism, and for half a century many of these historic photographs lay unpublished in Time-Life's archives. Printed here for the first time, they offer a graphic vision of a great city, Shanghai, poised on the precipice of political revolution. Seen through the lens of hindsight, Birns's photographs give us a sense not only of what China was like more than fifty years ago, but also of why the warfare, weariness, and desperation of the time proved such fertile soil for communist revolution. Today these everyday scenes of ordinary people-pedicab drivers, street vendors, bar girls, police, politicians, prisoners-tell a story of national resilience and dignity in the midst of enveloping poverty, repression, and fear. Birns's stark black and white photographs capture the dramatic end of an era, but they also look forward, letting us glimpse how Shanghai's past prefigures the city's commercial and cultural revival in the 1990s.
ISBN: 0520239903
Publisher: University of California Press
Hardcover : 144 pages
Language: English
Dimensions: 9.1 x 13.4 x 0.8 inches