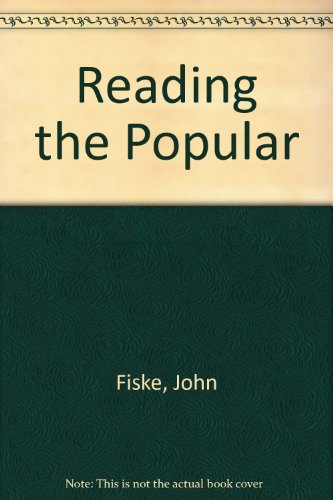 This revised edition of a now classic text includes a new introduction by Henry Jenkins, explaining ‘Why Fiske Still Matters’ for today’s students, followed by a discussion between former Fiske students Kevin Glynn, Jonathan Gray, and Pamela Wilson on the theme of ‘Reading Fiske and Understanding the Popular’. Both underline the continuing relevance of this foundational text in the study of popular culture.

Beneath the surface of the cultural artifacts that surround us – shopping malls, popular music, the various forms of television – lies a multitude of meanings and ways of using them, not all of them those intended by their designers. In Reading the Popular, John Fiske analyzes these popular "texts" to reveal both their explicit and implicit (and often opposite) meanings and uses, and the social and political dynamics they reflect.

Fiske’s "readings" of these cultural phenomena highlight the conflicting responses they evoke: Madonna may be promoted as a "boy toy", but young girls feel empowered by her ability to toy with boys; Chicago’s Sears Tower may be a massive expression of capitalist domination, but it can also allow one to tower over the city. In each case it is the latter option that interests him, for this is where Fiske locates popular culture: it is the point at which people take the goods offered them by industrial capitalism (however oppressive they may seem) and turn them to their own creative, and even subversive, uses.

Designed as a companion to Understanding Popular Culture, Reading the Popular gives the lie to theories that portray a mass audience that mindlessly consumes every product it is offered. Fiske’s acute perception and lively wit combine to provide a truly democratic vision of popular culture, one that respects the awareness and the agency of the people who make it.