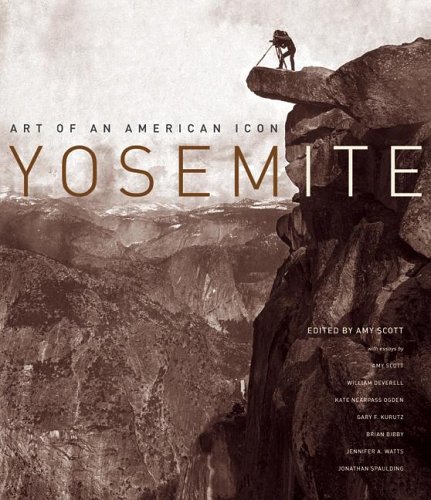 Yosemite: Art of an American Icon
by Amy Scott
Publisher's Description
This lavishly illustrated volume offers a stunning new view of Yosemite's visual history by presenting two hundred works of art together with provocative essays that explore the rich intersections between art and nature in this incomparable Sierra Nevada wilderness. Integrating the work of Native peoples, it provides the first inclusive view of the artists who helped create an icon of the American wilderness by featuring painting, photography, basketry, and other artworks from both well-known and little-studied artists from the nineteenth century to the present. Yosemite: Art of an American Icon pursues several evocative themes, including the relationship between environment and aesthetics in Yosemite; the various ways in which artists have shaped how we see and use the park; and the dynamic intersections between art, nature, and commerce that have played out during its history. In addition to offering an updated and comprehensive view of Yosemite's art over the past two centuries, the volume provides a rich and nuanced picture of the complexities and contradictions inherent in its enduring image as both a pristine wilderness and a highly sought-after tourist destination. With Essays by Amy Scott, William Deverell, Kate Nearpass Ogden, Gary F. Kurutz, Brian Bibby, Jennifer A. Watts, and Jonathan Spaulding.
ISBN: 0520249216
Publisher: University of California Press
Hardcover : 232 pages
Language: English
Dimensions: 10.2 x 11.6 x 0.9 inches