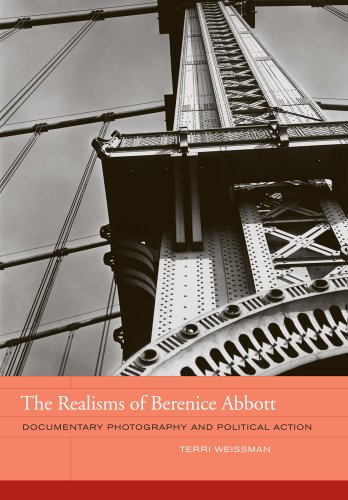 The Realisms of Berenice Abbott: Documentary Photography and Political Action (The Phillips Book Prize Series)
by Terri Weissman
Publisher's Description
The Realisms of Berenice Abbott provides the first in-depth consideration of the work of photographer Berenice Abbott. Though best known for her 1930s documentary images of New York City, this book examines a broad range of Abbott’s work—including portraits from the 1920s, little known and uncompleted projects from the 1930s, and experimental science photography from the 1950s. It argues that Abbott consistently relied on realism as the theoretical armature for her work, even as her understanding of that term changed over time and in relation to specific historical circumstances. But as Weissman demonstrates, Abbott’s unflinching commitment to “realist” aesthetics led her to develop a critical theory of documentary that recognizes the complexity of representation without excluding or obscuring a connection between art and engagement in the political public sphere. In telling Abbott’s story, The Realisms of Berenice Abbott reveals insights into the politics and social context of documentary production and presents a thoughtful analysis of why documentary remains a compelling artistic strategy today.
ISBN: 0520266757
Publisher: University of California Press
Hardcover : 264 pages
Language: English
Dimensions: 7.4 x 10.4 x 0.9 inches