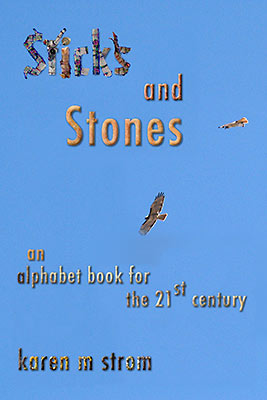 Sticks And Stones: An Alphabet Book For The 21st Century (iBook edition)
by Karen M. Strom
Sticks and Stones is a different kind of alphabet book, one for the new generation that would be meeting the world of the 21st century. It is written for children growing up on the border of this new world and on the border between the US and Mexico. The book teachs some basic facts about how computers work while at the same time presenting the world we live in as viewed from the author's perspective. Simple sticks and stones are used as a vehicle to teach the binary code. The binary code is used to spell out the words used for each letter of the alphabet book. The Latin letters are animated to bring up a display of the binary code for the letter.
ISBN: 9780988378520
Publisher: Polytropos Press