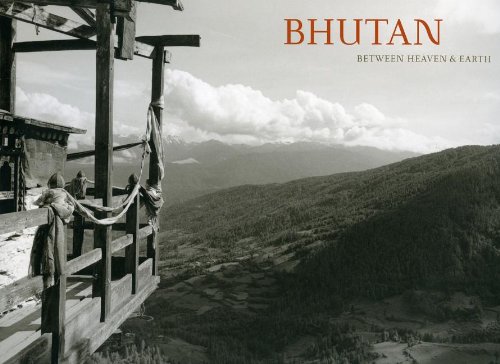 Bhutan: Between Heaven & Earth
by Mary Peck
Publisher's Description
“There cannot be enduring peace, prosperity, equality and brotherhood in this world if our aims are so separate and divergent—if we do not accept that in the end we are people, all alike, sharing the earth among ourselves and also with other sentient beings.” –Dasho Jigme Khesar Namgyal Wangchuck, Crown Prince of Bhutan (now the Fifth King), speaking at the first international conference on Gross National Happiness, 2004

In 1950 Tibet was invaded by China. Over the next ten years, many Tibetans fled to Nepal or India, and some escaped to Bhutan by making the climb over the Himalayan mountains. At that time Bhutan was a Buddhist monarchy, with barely half a million people, nearly every one of them a farmer. It was a country with a dynamic oral tradition and no written language, and with large expanses of unexplored and uninhabited land. No roads existed until the 1960s. The first tourists were allowed in limited numbers in 1974, and although more tourists are allowed today, the number is still controlled. Road construction is constant now, and television, the Internet, cell phones, and automobiles have arrived.

Mary Peck visited Bhutan between 1999 and 2005, having heard about this country that had been closed to visitors until the 1970s. “What drew me to Bhutan were stories about a country of more wilderness than cultivated or developed land, with a government that considers protection of those lands important, and a culture with reverence for the land and its resources,” says Peck. She understood her visits as standing on a curve of time—with a way of life that had existed with very little change for generations still visible and yet able to see enormous change on the horizon.

Bhutan: Between Heaven & Earth features over fifty duotone images taken by Peck of modern Bhutan that are a rare portrait of this society and landscape. Accompanied by essays by Peck and Dasho Karma Ura, this book is a beautiful representation of a country anchored by its past and brimming with hope for its future.
ISBN: 0615499333
Publisher: Museum of New Mexico Pr
Paperback : 140 pages
Language: English
Dimensions: 11.8 x 9.4 x 0.5 inches