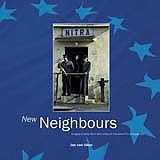 New Neighbours
by Jan van IJken
Photo-project about daily life in five Eastern European and five Dutch municipalities. Van IJken has used the twinning of these municipalities as a starting point from which to compare everyday life in Eastern and Western Europe. People are the focus of this series of photos. The individuals who inhabit these images have been captured in all kinds of everyday situations. Making use of the twinning of these towns and cities enabled the photographer to take advantage of existing contacts and networks. But the most fascinating aspect of this approach is undoubtedly the comparison it generates between how people in Eastern and Western Europe live on the eve of the enlargement of the European Union. The reader is confronted with the question of whether the differences are really as great as is often assumed.
Publisher: Reproka Visual Communication, Amersfoort, The Netherlands