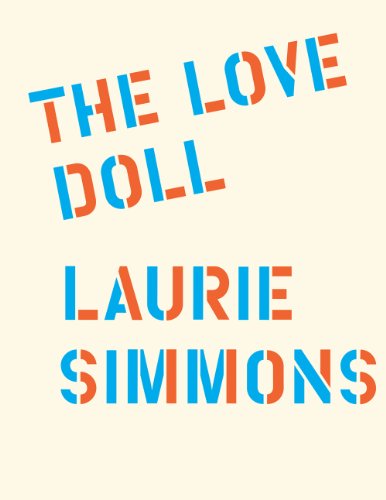 Laurie Simmons: The Love Doll
by Lynne Tillman
Publisher's Description
Throughout her career, photographer Laurie Simmons (1949) has staged scenes with dolls, dummies and occasionally people for her camera. In the fall of 2009, Simmons opened a new chapter to her work and ordered a customized, high-end “Love Doll” from Japan. The surrogate sex partner arrived in a crate, clothed in a transparent slip and accompanied by a separate box containing an engagement ring and genitalia. Simmons documented her photographic relationship with this human scale “girl,” depicting the lifelike, latex doll in an ongoing series of “actions”-each shown and titled chronologically from the day Simmons received the doll up to the present, describing the relationship she developed with her model. The first days of somewhat formal and shy poses give way to an ever-increasing familiarity and comfort level as time passes. A second doll arrived one year later. This new character, and the interaction between the two, reveal yet another dynamic in composition, both formal and psychological. In search of a stage for her Love Doll, Simmons turned to her own home, transforming it into an artfully staged, color coordinated, oversized dollhouse. A tale of disquieting adult fantasy, desire and regret, The Love Doll accompanies the complete photographic series with the artist’s diary entries and is printed on a special paper to evoke the touch of a Love Doll’s skin.
ISBN: 0615596894
Publisher: Baldwin Gallery/Salon 94 Gallery/Tomio Koyama Gallery/Wilkinson Gallery
Hardcover : 120 pages
Language: English
Dimensions: 10 x 11.5 x 0.7 inches