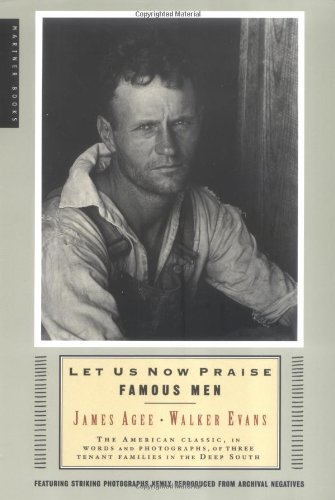 Let Us Now Praise Famous Men: The American Classic, in Words and Photographs, of Three Tenant Families in the Deep South
by Walker Evans
Publisher's Description
In the summer of 1936, James Agee and Walker Evans set out on assignment for Fortune magazine to explore the daily lives of sharecroppers in the South. Their journey would prove an extraordinary collaboration and a watershed literary event when in 1941 LET US NOW PRAISE FAMOUS MEN was first published to enormous critical acclaim. This unsparing record of place, of the people who shaped the land, and of the rhythm of their lives was called intensely moving and unrelentingly honest, and is 'renowned for its fusion of social conscience and artistic radicality' (New York Times). Today it stands as a poetic tract of its time, recognized by the New York Public Library as one of the most influential books of the twentieth century. With an elegant new design as well as a sixty-four-page photographic prologue of Evans's classic images, reproduced from archival negatives, this sixtieth anniversary edition reintroduces the legendary author and photographer to a new generation.
Amazon.com Review
Just what kind of book is Let Us Now Praise Famous Men? It contains many things: poems; confessional reveries; disquisitions on the proper way to listen to Beethoven; snippets of dialogue, both real and imagined; a lengthy response to a survey from the Partisan Review; exhaustive catalogs of furniture, clothing, objects, and smells. And then there are Walker Evans's famously stark portraits of depression-era sharecroppers--photographs that both stand apart from and reinforce James Agee's words.

Assigned to do a story for Fortune magazine about sharecroppers in the Deep South, Agee and Evans spent four weeks living with a poor white tenant family, winning the Burroughs's trust and immersing themselves in a sharecropper's daily existence. Given a first draft of the resulting article, the editors at Fortune quite understandably threw up their hands--as did several other editors who subsequently worked with a later book-length manuscript. The writing was contrary. It refused to accommodate itself to the reader, and at times it positively bristled with hostility. (What other book could take Marx as the epigraph and then announce: "These words are quoted here to mislead those who will be misled by them"?) Response to the book was puzzled or unfriendly, and Let Us Now Praise Famous Men sputtered out of print only a few short years after its publication. It took the 1960s, and a vogue for social justice, to bring Agee's masterwork the audience it deserved.

Yet the book is far more interesting--aesthetically and morally--than the sort of guilty-liberal tract for which it is often mistaken. On an existential level, Agee's text is a deeply felt examination of what it means to suffer, to struggle to live in spite of suffering. On a personal level, it is the painful, beautifully written portrait of one man's obsession. In its collaboration with Evans's photographs, the book is also a groundbreaking experiment in form. In the end, however, it is more than merely the sum of its parts. Let Us Now Praise Famous Men is, quite simply, a book unlike any other, simmering with anger and beauty and mystery. --Mary Park