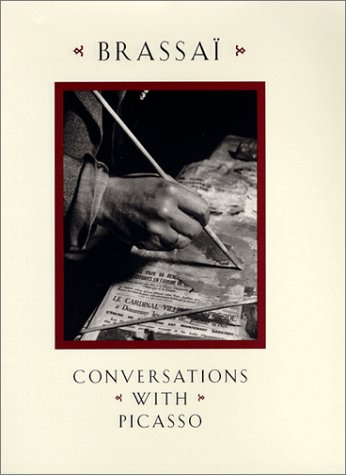 Conversations with Picasso
by Jane Marie Todd
Amazon.com Review
Henry Miller called Brassaï (born Gyula Halasz) "The Eye of Paris." As a photographer, journalist, and author of photographic monographs and literary criticism, he had an uncanny ability to capture the Paris art world of the mid-20th century. Conversations with Picasso, originally published in 1964, is a collection of Brassaï's memoirs, resurrected from scraps of paper he stored in a huge vase each night after his talks with the famous Spanish painter, whose work he photographed from 1932 to 1962. In keeping with the lively bohemian spirit that so characterized Pablo Picasso's milieu, Brassaï wrote these notes in a vivid, conversational style, and they are now vignettes, of a sort, from a theatrical time capsule. Presented alongside the actual photographs he took during his visits with Picasso, Brassaï's anecdotes of the artist and his most intimate associates paint an unforgettable portrait of Picasso the master artist and the man. Sly humor and telling details embellish these accounts--in one particularly well-rendered scene, Picasso throws a temper tantrum over a lost flashlight--that vividly depict many of the artist's creative revelations, his insatiable curiosity, and his views on the art of his time, including that of the surrealists. One very strong image depicts Picasso, with brush in hand, using a palette made of newspaper. Confiscated by military censors due to the mere presence of World War II headlines, this photo represents one of the many wartime frustrations Picasso endured, including using a bathroom for a studio and secretly casting sculptures in scarce bronze at night. Underneath the worshipful posturing so prevalent in writings of the time, in which an everyday shopping list of paint colors is hailed as a prose poem, Brassaï offers an intimate chronicle full of loving detail of the impossible yet delightful enfant terrible. Entertaining, charming, light but truly satisfying fare. --A.C. Smith
Publisher's Description
Published in France thirty years ago, Conversations with Picasso is Brassaï's account of his encounters with the fabled artist. Includes many photographs.
ISBN: 0226071480
Publisher: University Of Chicago Press
Hardcover : 412 pages
Language: English
Dimensions: 6.3 x 9.3 x 1.1 inches