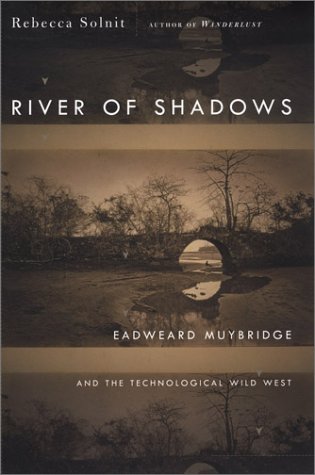 River of Shadows: Eadweard Muybridge and the Technological Wild West
by Rebecca Solnit
Publisher's Description
Muybridge stands in the not-so-distant past of the mid-nineteenth century as a true Californian opportunist, linked to the history of photography, as most know, by his motion studies. Financed by Leland Stanford (of Stanford University), those studies, which were begun to resolve a debate regarding the placement of the feet of a trotting horse, led to photographs of flying birds, pouring water, and running men, among a myriad of other subjects. The studies took 8 years of his life, but Solnit's brilliant, engaging biography shows that he is linked to far more than just the early history of photography; indeed he stands as a harbinger of the modern era. "His trajectory ripped through all the central stories of his time-the relationship to the natural world and the industrialization of the human world, the Indian wars, the new technologies and their impact on perception and consciousness. He is the man who split the second, as dramatic and far-reaching an action as the splitting of the atom."-Solnit.
ISBN: 0670031763
Publisher: Viking Adult
Hardcover : 320 pages
Language: English