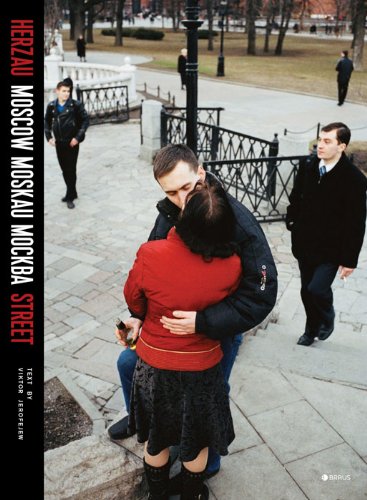 Herzau | Moscow | Street
by Andreas Herzau (english / german language)
A touch of rebelliousness was one of the motives that led me to take an interest in Moscow. For a child of the Cold War, growing up in western Europe in the 1960s and 1970s, Moscow and the whole of eastern Europe was a closed book. Apart from western propaganda and/or historical facts from school lessons, I knew next to nothing about this city, which always claims to be a representative of Russia, but is in fact a state within the state. Russia is not Moscow, and Moscow is by no means Russia.

In contrast to New York, Moscow is not well-represented in our collective visual memory. When I took photographs a few years ago for a book about New York, I was also engaging in a dialogue with the images that are already present in our heads. We know New York and even think we know what life is like there, without ever having been in the city. Not many people have been to Moscow, and we hardly know it. We associate golden domes, the metro, the ballet and Russian politics with Moscow, but this city has a lot more to offer and embodies many cultural impulses – in photography too. You only have to think of all the Russian typographers, film directors, architects and photographers of the 1920s and 1930s. They taught us a new way of seeing things, and – after emigrating to the USA via Europe – they visually moulded the great American magazines for decades and contributed to their great success. They were avant-garde.

Moscow is prime territory for a street photographer, and I enjoyed understanding nothing, suddenly being illiterate and having to rely entirely on my intuition, my eyes and my feelings. I am forced to be attentive, to decode the signs that I don’t know, to open up in order to understand, to take photographs. During my work in Moscow I repeatedly went through phases that transported me into a different state of mind and made it clear to me that there is nothing better than to take photographs – in order to understand.
ISBN: 3862280284
Publisher: Edition Braus Berlin GmbH
Hardcover Language: German