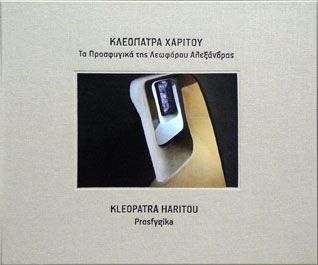 PROSFYGIKA, The refugee settlements of Alexandra's Av.
by IAN JEFFREY, Nikos Vatopoulos, Kleopatra Haritou
Published 2012 Illustrations 82 colour pictures Number of pages 98 Dimensions 24 ? 29,5 LANGUAGE Greek / English Hardcover Price : € 20,00 The book is divided in two chapters' the architecture and the interior of the apartments, as left from the inhabitants who sold their apartments to the government, as asked. There are a few building complexes in Athens as identifiable as the refugee settlements of Alexandra's Av (Prosfygika) -1933-1935. While renowned for their architectural "honesty" and notorious for their repulsive decay, these apartment blocks enfold a multitude of Greek dramas, which do not always relate to their principal function or their innovative architecture, but rather with the interpretation of their image and position in the city. However, regardless of all the above, the refugee settlements of Alexandra's Av. are in themselves a part of the history of Athens. They spring -as a need- from a Greek trauma (the Asia Minor Catastrophe, The Greco-Turkish War of 1919–1922, when up to 2.5 million Greeks lived in the Ottoman Empire), and manifest as a result in the social landscape of a fast developing capital, Athens. Free from the art deco elements of the bourgeois, appear to bravely present themselves while they rise in parallel formations, like concrete and stone pieces of LEGO, functional applications of an austere, mechanistical and revitalised BAUHAUS. The refugee settlements of Alexandra's Av. numbering 228 apartments, appeared gradually within an intellectually planned architectural setting and became autonomous, like an organism that functioned as a society, a whole, a hive and an islet at the edge of the then vibrant city. Moreover, the settlements gave birth to a pulsating and fluid life, enclosing and bringing together the successive faces and cycles of refugee life.
ISBN: 978-960-476-108-1
Publisher: THE BENAKI MUSEUM