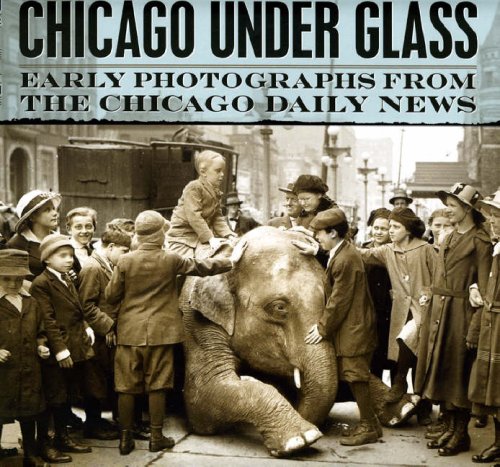 Chicago under Glass: Early Photographs from the Chicago Daily News
by Rick Kogan
Publisher's Description
When the Chicago Daily News closed its doors in March 1978 after over a century of publication, the city mourned the loss of an American original. The Daily News boasted the inventive, aggressive writing of such luminaries as Carl Sandburg and Ben Hecht. It was also one of the first newspapers in the country to feature black-and-white photography. In 1900, staffers from the paper’s art department began lugging bulky cameras, heavy glass plates, and explosive flash powder throughout the city. A labor strike, a boxing match, or a crime scene—it was all in a day’s work for the Daily News photographer.

These cameramen helped sell papers, but, as Mark Jacob and Richard Cahan reveal, they also made art. Chicago under Glass: Early Photographs from the Chicago Daily News is the first collection of images from the photo staff’s early years, 1901 to 1930. Jacob and Cahan, seasoned journalists themselves, have selected more than 250 images—many of which have never before been published—from the nearly 57,000 glass negatives housed at the Chicago History Museum. They include rare photographs of a young Buster Keaton with his wife and child, waiting to board a train and the notorious Al Capone outside a courtroom, smoking a cigar and consulting with his lawyer. Each thematic section begins with a fascinating introduction by the authors, and each image is accompanied by insightful historical commentary.

These fragile glass records are a remarkable piece of American history. Together, they capture a time of massive change and stark contrasts, the defining years in a place Nelson Algren called “Hustlertown.” From candid shots of the Eastland steamer disaster to the glittering electric lights of the White City amusement park and the grim aftermath of the Saint Valentine’s Day Massacre, the history these images reveal is not simply the story of Chicago, but the history of the modern American city.
ISBN: 0226089304
Publisher: University Of Chicago Press
Hardcover : 284 pages
Language: English
Dimensions: 8.7 x 10.2 x 0.9 inches