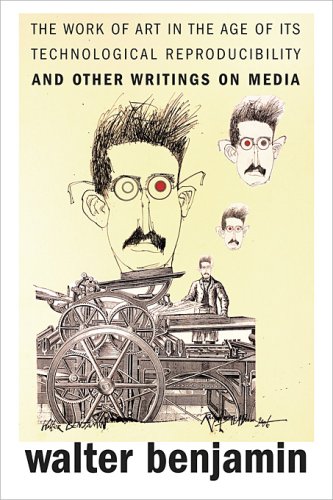 The Work of Art in the Age of Its Technological Reproducibility, and Other Writings on Media
by Michael W. Jennings
Publisher's Description
Benjamin’s famous “Work of Art” essay sets out his boldest thoughts—on media and on culture in general—in their most realized form, while retaining an edge that gets under the skin of everyone who reads it. In this essay the visual arts of the machine age morph into literature and theory and then back again to images, gestures, and thought.

This essay, however, is only the beginning of a vast collection of writings that the editors have assembled to demonstrate what was revolutionary about Benjamin’s explorations on media. Long before Marshall McLuhan, Benjamin saw that the way a bullet rips into its victim is exactly the way a movie or pop song lodges in the soul.

This book contains the second, and most daring, of the four versions of the “Work of Art” essay—the one that addresses the utopian developments of the modern media. The collection tracks Benjamin’s observations on the media as they are revealed in essays on the production and reception of art; on film, radio, and photography; and on the modern transformations of literature and painting. The volume contains some of Benjamin’s best-known work alongside fascinating, little-known essays—some appearing for the first time in English. In the context of his passionate engagement with questions of aesthetics, the scope of Benjamin’s media theory can be fully appreciated.
ISBN: 0674024451
Publisher: Belknap Press of Harvard University Press
Paperback : 448 pages
Language: English
Dimensions: 6.3 x 9 x 1.1 inches