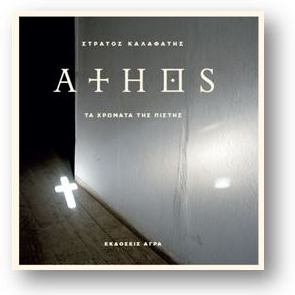 Athos: The Colors of Faith
by Stratos Kalafatis
Men are not born on the Holy Mountain. They are drawn to Athos by their faith, their need, their curiosity, or their desperation. There, initiated into a life of asceticism, they uncomplainingly take their turn in a relay race to death whose finishing line is a place in the ossuary of the monastery. The same race in which the baton has been passed for a thousand years from abbot to elder and monk to novice without distinctions. Because Monasticism is earned, not inherited, in this test of patience.

I don't really know what brought me to the Athonite Republic in January 2008.

It might have been the constant encouragement of my friend and colleague, Arsenios, a graduate of the Athonias Academy, or perhaps a decision to test my conviction that this was not a place you could assimilate in photographs. There was no particular starting point – I'd already reached the half-way point in my life, in my images, in my relationship with the Holy Mountain I'd been visiting since the late Seventies.

I returned from my first trip to Karyes and the Athonias Academy rapt and secretly happy with what I knew was still to come. The 25 journeys and 200 days and nights that followed would set the tenor for a good part of the next five years.

Two hundred days, because Time works differently on Mount Athos. It confounds our desperate need to get things done against the clock, confuses the hands on our watches ; it becomes one with the centuries. This was the first rule I learnt there. There would be many more rules and conventions of Athonite life to come ; some I would understand, others I would treat with the due respect.

Twenty-five journeys on transport of every sort, by boat, mule or on foot. A good many hikes, long, winding and unforgettable. There are no avenues on Mount Athos, just dusty tracks whose twists and turns always bring you to the unexpected. That's where the secret paths begin that lead you to monasteries, sketes, cells, wells and caves ; to little retreats and to real life hermits. To meetings chance and scheduled ; revelatory meetings of few words, full of possibilities that silently determined our roles. Me, ` the official photographer ', as Arsenios put it, them ` cell elders, monks, novices or worldly folk '. Sincere and exposed, we would exchange glances ; one of us would yield first to the other's desires, then silence. Followed by another cell, other people, one more meeting, different images.

Sometimes I was an Observer, other times an Initiate in litanies and saint's day celebrations, vigils and debates, miracles and revelations. The images were just the pretext ; the Holy Mountain was the reason why. The remaining memories stirred the desire to return. Round about then, at my mid-way starting point.

There were many people who supported me along the way, each in their own way, and I am grateful to them all. I will single out Arsenios Toptsidis, Father Ieronymos of Simonos Petras Monastery, Irene Panagopoulou, Arsen and Rupen Kalfayan, Dimitris Papazoglou, Ilias Skoulakos, Dimitris Deirmentzidis, the Granis family, Litsa Tatoglou and Jean-Marie Verlet, Nikos Xydakis and Stavros Petsopoulos. Finally, my thanks, too, to my partner Lia and my daughters Daphne and Io, who made it easy for me to be absent for so long.