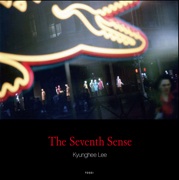 SAMSARA (The Cycles of Life) By Satomi Fujimura, Curator, Tokyo Metropolitan Museum of Photography When I saw Kyunghee Lee’s work for the first time, I wondered what the floating impression the work created was all about. The images are the fixed ones for sure, but the angles are not. It is probably because she uses a lot of soft focus techniques and reflections rather intuitively than intentionally when taking photographs. In each photograph, images are created in a multilayered manner. So it is hard to grasp what is in the photograph at first glance. Each photograph is a finished work, but it is as if we were looking through the viewfinder before adjusting the focus, as if the next scene were to come up. The theme of Lee’s work this time is the cities in seven different countries she visited. Taking photographs of those cities took her three years, yet her work doesn’t give us a clear idea of its time frame. It may seem the work took much longer time. But it may also seem as if all the photographs were taken at the same time. Lee herself told me she wanted to incorporate a sense of time into her work this time. If we hear of the sense that time goes back and forth, we may think of “time travel” in science-fiction novels and movies. But this time, when I saw her work, it is not “time travel” but “the cycles of life” that came to my mind. The Sea of Fertility, by Yukio Mishima, a leading novelist of modern Japanese literature, is his last full-length novel that pursues the theme of the cycles of life. Shigekuni Honda is a character who acts as the storyteller in this novel. In Lee’s work I detect something comparable to this character’s viewpoints as if her subjects were captured from Honda’s angle. Honda encountered reincarnations of his close friend, Kiyoaki Matsugae, four times in his life. It seems that he always looked around to seek something beyond. The term “samsara,” or the cycles of life, is common in the countries where people are familiar with Asian Buddhist or Hindu traditions, but in the other countries, it might be difficult to understand the notion of “reincarnation.” However, everyone must have a memory of wondering what their prior state of being might be, at one time or another. Lee’s work not only shows the subjects depicted in the photograph. It also adumbrates a notion of time and space which are at the back of the images. To imagine such time and space is a sweet experience. Sweet as it is, it also makes us feel a little fear that we might overlook something important. "The Seventh Sense" Pages: 60 / photos: 53 Size: 290x290x13mm / hardcover Price: 3,675JPY Release Date: October 2012