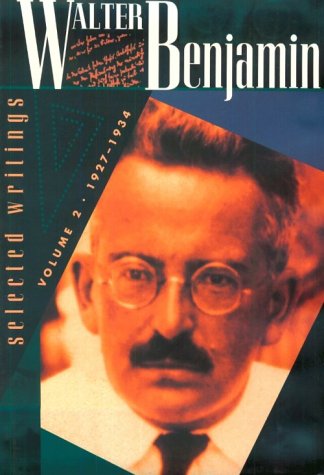 Walter Benjamin: Selected Writings, Volume 2: 1927-1934
by Michael W. Jennings
Publisher's Description
The companion to Belknap Press's equally ambitious collection of Benjamin's writings, Volume II reflects the author's broadening interests and explorations, touching on areas of popular culture. Contains his essay, Little History of Photography.
Amazon.com Review
A leading German critic from the generation of Europeans scarred by the First World War, Walter Benjamin (1892-1940) had a writing career marked by deep philosophical insights and tumultuous emotional crises. But until recently, most of his work was unavailable in English; the handful of essays that could be read in English, like "The Work of Art in the Age of Mechanical Reproduction," were undisputed classics, but the full spectrum of Benjamin's thought remained untapped. That has changed with Harvard University's publication of the multivolume Selected Writings. This second volume covers Benjamin's work from 1927 to 1934, the period in which he established himself as a leading public intellectual, and encompasses a wide variety of literary forms addressing an even wider variety of subject matter. From interviews with André Gide to film reviews of work by Chaplin and Eisenstein, from the autobiographical recollections of "A Berlin Chronicle" to his reflections on the cultural nostalgia for children's literature and toys, Benjamin wrote with perception and unflagging inquisitiveness. The editors have provided a chronological essay, which helps place the assembled writings in the context of Benjamin's life; the collection considered as a whole will undoubtedly be of vital importance to any scholar of modern European philosophy.
ISBN: 0674945867
Publisher: Belknap Press of Harvard University Press
Hardcover : 880 pages
Language: English
Dimensions: 6.6 x 9.4 x 2 inches