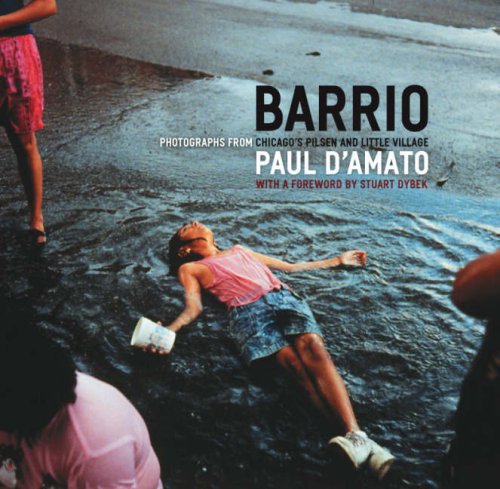 Barrio: Photographs from Chicago's Pilsen and Little Village (Chicago Visions and Revisions)
by Stuart Dybek
Publisher's Description
In 1988 photographer Paul D’Amato was driving around Chicago with his camera when he decided to follow Halsted Street into Pilsen, the city’s largest Mexican neighborhood. Intrigued by the barrio and neighboring Little Village, he began to take photographs and would continue to do so off and on for the next fourteen years. D’Amato started with the public life of the neighborhood: women and children in the streets, open fire hydrants, and graffiti. But later—after he got to know the area’s Mexican residents better—he was allowed to take more intimate photos of people at work, families at weddings and parties, and even gang members.

Barrio collects ninety of these striking color images along with D’Amato’s fascinating account of his time photographing Mexican Chicago and his acceptance—often grudging, after threatened violence—into the heart of the city’s Mexican community. Some of the photos here are beautifully composed and startling—visual narratives that are surreal and dreamlike, haunting and mythic. Others, like those D’Amato took while shadowing graffiti artists in the subway, are far more immediate and improvisational. With a foreword by author Stuart Dybek that places D’Amato’s work in the context of the Pilsen and Little Village that Dybek has elsewhere captured so memorably, this book offers a penetrating, evocative, and overall streetwise portrait of two iconic and enduring Hispanic neighborhoods.
ISBN: 0226135055
Publisher: University Of Chicago Press
Hardcover : 128 pages
Language: English
Dimensions: 10.8 x 11.1 x 0.7 inches