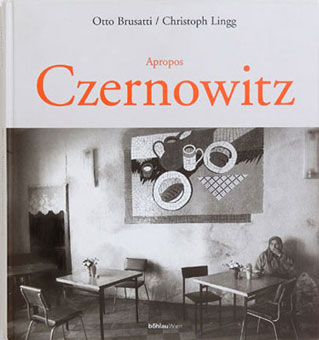 Suddenly names reappear. Old names, thought to have been erased from the world's memory. The names of cities.

To some degree they are reminiscent of a long outdated, badly-worn stage production; then they light up again like a hot melting pot from those bygone days; then they – these names – also breed excitement, give birth to wishes, allow nostalgia and the idea of expansion to the east to unfold in one's mind.

“Chernivtsi” – is one of these names, a very special one.

Chernivtsi – the place from nowhere. Today it lies in the Ukraine, but actually it is still in the old Bukovina, and it is, of course, also the microcosm where European dramas of the 19th and 20th centuries were rehearsed and played out as well.

It was the city of the intellect and of dozens of synagogues. There was a splendid display of European Jewish culture, and one had to be Romanian and then Soviet, was wiped out and became relevant only to historians and those interested in Yiddish nostalgia. Chernivtsi lives in the mind.

But Chernivtsi also still “exists” today, is still there. Poor. Clothed in post-war misery, yet at the same time apparently a participant in the new beginnings that have come after 1989. The city with an enormous black market and, as a legacy from the past, the biggest, most depressing Jewish cemetery.

The report tells of Chernivtsi today based on Chernivtsi of yesterday. Of the city as a beautiful place, but only after much more than a second glance, and as a place that is no stranger to darkness.