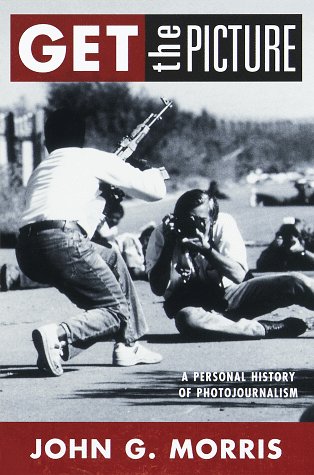 Get the Picture: A Personal History of Photojournalism
by John G. Morris
Publisher's Description
As a photographer for LIFE during the thirties and then as the picture editor during the second World War, John G. Morris helped shape the world of photojournalism. This personal memoir, threaded around many well known images, is as much a history of the twentieth century as of photojournalism itself.
Amazon.com Review
"I am a journalist," says John G. Morris, "but not a reporter and not a photographer." He is a picture editor--the person who selects which photos get used in a newspaper or magazine--and he's worked for some of the top names in the industry: at Life under Henry Luce, for Katherine Graham and Ben Bradlee at the Washington Post, and for Abe Rosenthal at the New York Times, where his bold page-one use of a photograph by Eddie Adams of the execution of a Vietcong suspect by Nyugen Ngoc Loan became one of the Vietnam War's most enduring images.

Morris, who also served as the first executive editor for the Magnum photojournalist press agency, looks back at his career in this lively memoir. Among the colleagues who turn up in anecdotes are Alfred Eisenstaedt, Lee Miller, Henri Cartier-Bresson, and Robert Capa; the book leads with a grainy Capa photograph of the D-day landing, 1 of only 11 shots that survived a freak accident in the London photo labs of Life as Morris and his team raced against the clock to get images to America in time for the next issue. There are over 100 other powerful photographs, taken at the Japanese-American internment camp at Manzanar, the Nazi concentration camp at Majdanek, and the front lines of the Vietnam and Gulf Wars, and other locales. In addition to being a dynamic storyteller, Morris is also steadfast in his determination that photojournalists should be given the freedom--both in resources and lack of censorship--to provoke us into a new awareness of what is happening in the world. --Ron Hogan